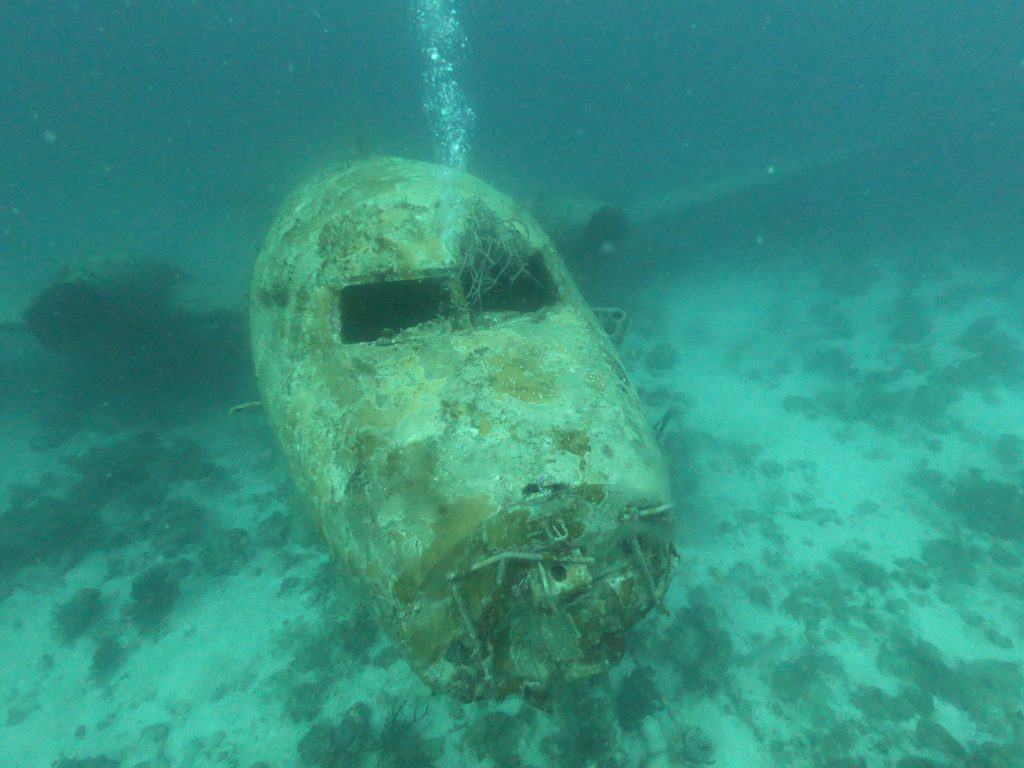 How is wreck diving in Aruba?

In Aruba, you can dive on different wrecks in one dive. Aruba has a 33 km² long beach shore and belongs to the Lesser Antilles in the southern Caribbean Sea. Here is the opportunity to swim true one of the airplane’s wrecks as well. One of them is called the YS-11, and the other one is a DC-3 ( Convair 240 ) both deliberately sunk as an artificial reef for Scuba Divers, and this has become a significant dive attraction for anyone visiting Aruba.

Where are the best wreck dives in Aruba?

Many people do not realize that Aruba is rich in wreck diving spots with many great wrecks that can be explored. So whether you are looking for your first wreck dive or you did many all ready, in Aruba, you still can explore this beautiful wrecks, and those are perfect for photography.

The DC- 3 is a 40 seater aircraft and 22 meters long, with was confiscated by the authorities in late 1980. The plane was sunk on shallow depth had moved in the Hurricane season to a depth of 80 feet when the fuselage broke into two big pieces. Other plane parts are at the bottom of 45 feet on the sloping reef. The cabin has been stripped, and all doors are accessible, and various crustaceans have made the cockpit there home. It is always intriguing to see something that is normal in the sky to find it on the seabed.
The DC-3 is still penetrable, and the interior of the fuselage has for divers an excellent photo opportunity. The airplane lays on a sandy bottom reef with colorful sponges and soft coral. Sometimes you can find an eel in the motor of the aircraft because parts of the plane are in the years scattered around the area and taken over by marine life.
YS- 11 NAMC or also named S-11 is a Japanese manufactured turboprop passenger airliner belonging to Air Aruba it was not anymore in service and donated to be sunk off in 2004.
The depth of the YS 11 it 23 meters and the plane is 14 meters long. The cockpit is still intact, but the nose cone has fallen off, and you can dive from down – up true the fuselage of the airplane wreck.
The planes are situated close to the beach and shoreline and can easily be accessed by boat or by a shore dive. It is recommended to go with a PADI divemaster if you do not know the area because you have to know where and what you are searching for these first times. In this link, we put a video of the wreck

This is an artificial reef made the front of the harbor to let the deep cruise ships come in. What happened is that this area became a beautiful reef with soft coral sponges and lots of marine life. Also, there is a tugboat where can be dive on and this is a place where is first saw a hogfish, did you ever saw a fish that looked like a wild boar?

This was an Italian-built lake steamship tanker and was torpedoed by a German submarine the U-156 during the Second World War. They say it was used to go into Maracaibo lake for the oil and then it was refined on Aruba and the left in big oil tanker escorts to use the gasoline for fighting in the Second World War. Logistically Aruba was of vital importance for an oil refinery in the second world war, and for this aspect, Aruba was getting observed and attacked by the German U-boat. After the attack, the still intact front and aft section of Pedernales was separated from the damaged midsection, and both were towed to the Lago drydocks to be welded together. The repaired ship left Aruba on July 30, 1942, for Curacao with final destination Baltimore USA for further repairs. The midsection of the Pedernales is what constitutes the wreck dive site today. Those parts are beautiful to dive on, and there are nice puffer fish to find such as shown on the video on our YouTube canal.

Launched in 1939 in Hamburg it left for his first trip to the Caribbean. The SS Atilla was a cargo ship built for the trade between the Caribbean and Germany. In 1940 the vessel was scuttled during the Second World War when the Germans invaded the Netherlands, and in that point, the Dutch were not more neutral anymore in the conflict.
The captain did not want to surrender his new cargo ship, and they put the steam engines and heaters on high, and then let the seawater came in witch exploded and sunk the boat. The captain and his crew were arrested as a Prisoner of War and brought over to Bonaire to a Prison camp. The story goes that after the war the captain came back with diving gear and went into the ship and retrieved interesting material, sold it and bought a house on Bonaire. I can imagine that there were worst places to stay as a prisoner of war at that time.

SS Antilla is 122 meters long in length, and it is nice to explore in day and night. There are no strong currents, and it is lovely to dive for photography on the wreck and considered as one of the best wreck dives in the Dutch Caribbean. The surrounding marine life has a rich diversity, and one of my favorite fish is the big pufferfish. There are also angelfish, bluehead brassed and yellowtail snappers and green eels to see.

Parrotfish and other herbivorous fish feed on algae that compete with corals for light and oxygen, thus enabling the reef to flourish. The white sand what you see comes from these beautiful fish after crunching on the coral reef.

Because hurricanes and the sea having an effect on the wrecks, it is not wise to penetrate the wreck anymore as could be done before. The material and plate work has gone worse, and you have to be careful about going in. The wreck is surrounded with sponges, corals, gorgonians and anemones, sponges and marine life. Every time when I dive the wreck I see new marine life, so this one om my favorite wrecks to visit.

Jane C
This wreck is on the west side of the palm island just on the coral reef. There are beautiful different kinds of corals growing on the steel plates of the decks and cabins. The soft corals are waving in the currents that flow in and out of the portholes. The Jane C was tried to be confiscated in the late 1980s, but ending up on the seabed and become a lovely diving spot. A night dive on the Jane C is perfect because when the polyps of the corals come out, the wreck seems enveloped in a halo of precious colors.
If you have any questions or want more information on these wrecks or area, please do not hesitate to send me an email.

This article is written by Davey on the website Fendaux. Send us an email to book your next Scuba Dive training, guided trip, and beautiful accommodation across Aruba or sign up for our newsletter, and you will receive free reductions and interesting holiday information.

PrevPrevious PostHow is Mallorca in the winter?
Next PostGlassmaking in MallorcaNext