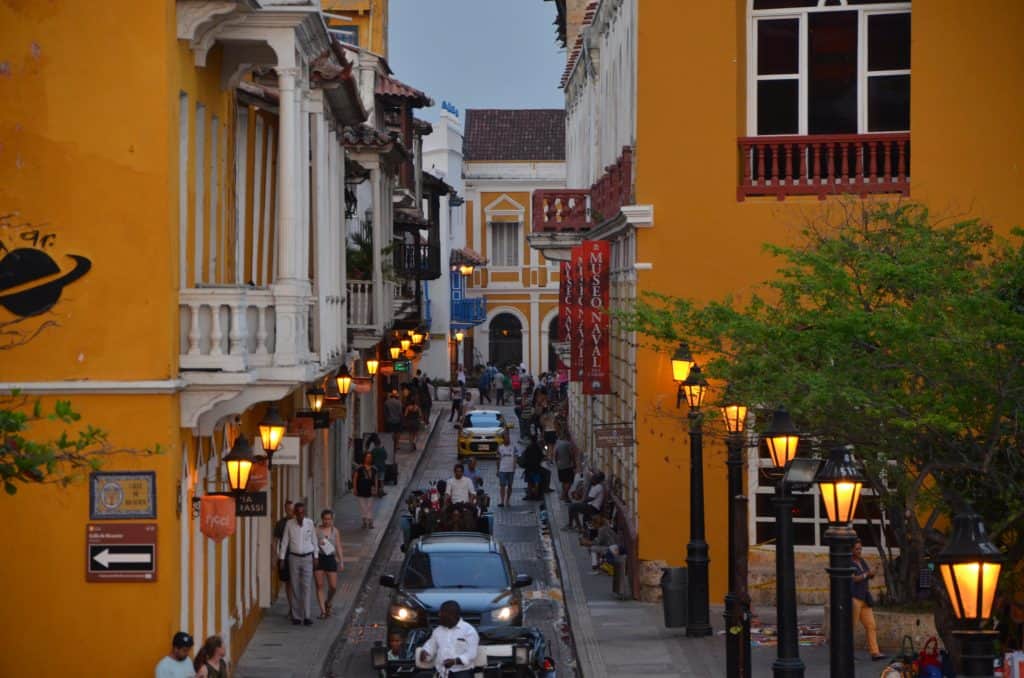 My returning visit back to Cartagena at the beginning of the march was this time focused on the historical city of Cartagena, and to go more specific into writing a travel blog for architecture.  While the other travel blog went more about how is traveling the Sucre region of Colombia, this week, I wanted to know more about the city of Cartagena itself and its history. 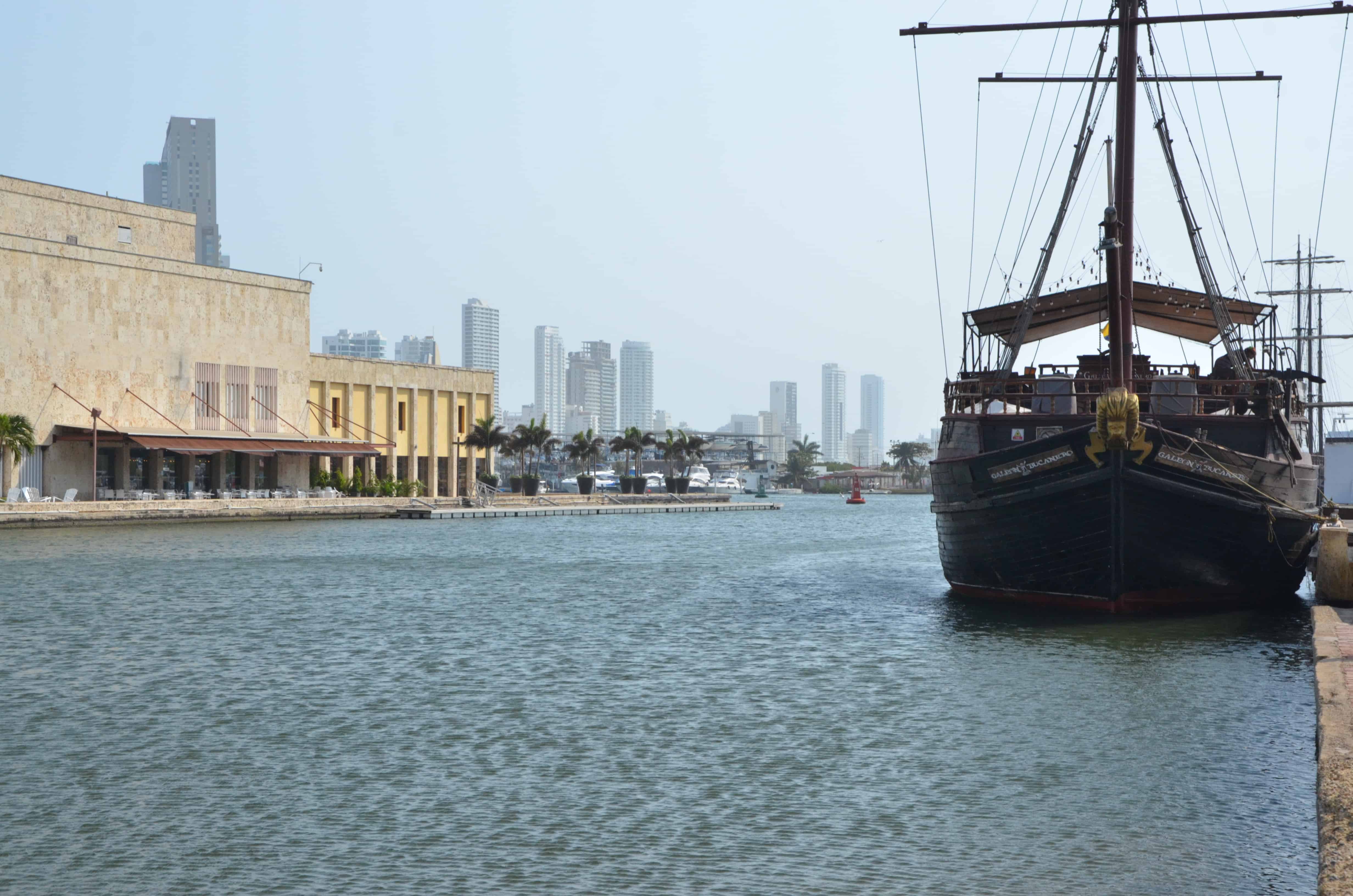 My feeling about Cartagena is that the culture and the energy of this city are magnificent. I stayed in a reasonable hotel, and I preferred to be in walking distance from the historical town.

My second stay in Cartagena was in Hotel Corales de Indias, and this is a clean and fresh hotel with an excellent restaurant and a beautiful swimming pool. The hotel is close to the Airport and with a taxi 10 minutes from the historical city for 6000 pesos. 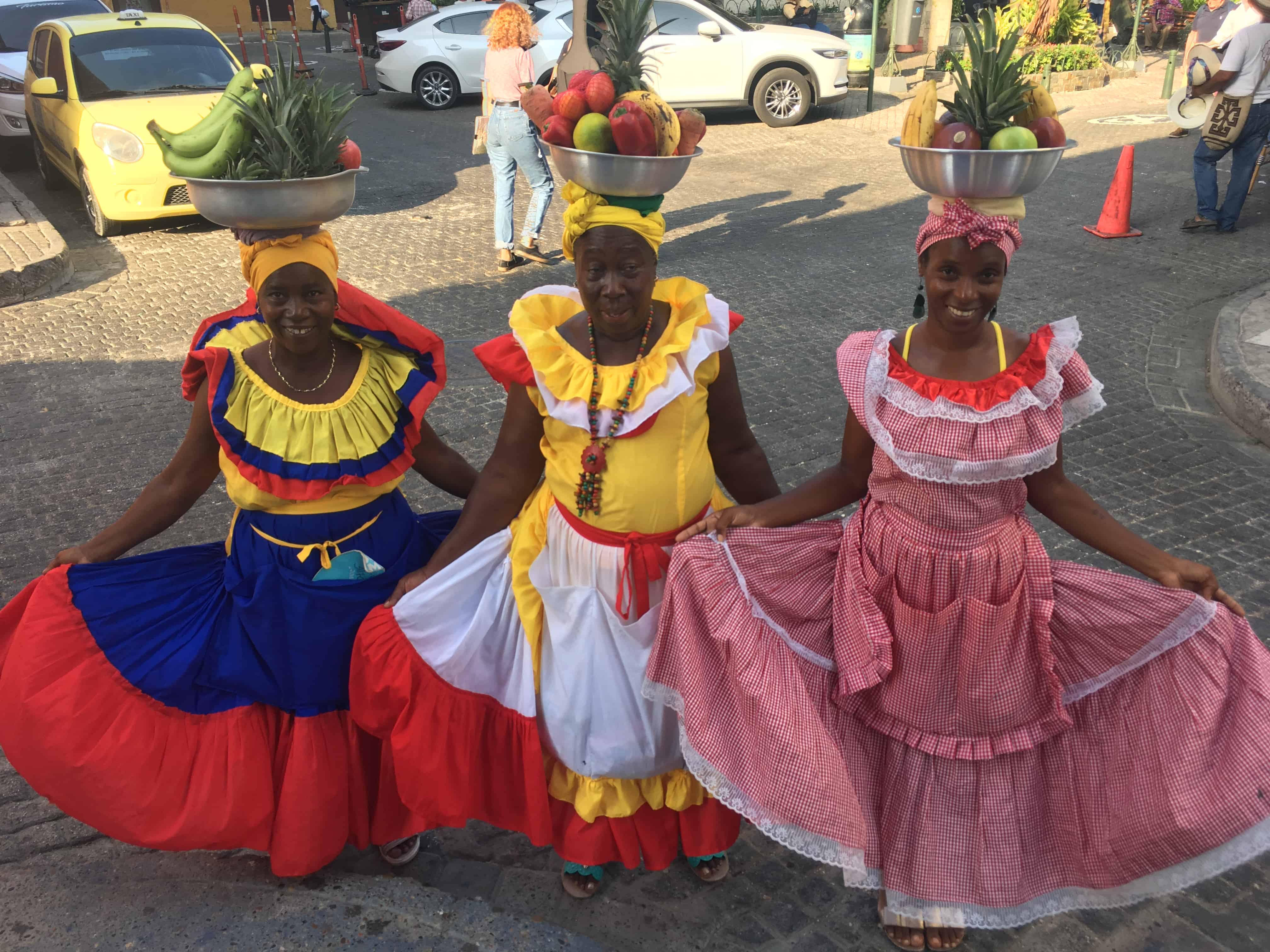 Hotel Astra Suite is closer to the historic city, and the price to stay here is cheaper then Corrales. The hotel has friendly service, clean rooms, and a swimming pool, so I changed to this hotel for my more extended stay. Just across the hotel, there is a beach, and if you like, you can walk from the hotel to the city, and you pass the museum, Rafael Nuñez, with colonial-style build architecture. It is nice to have a look at the house where he was born and lived. He was the leading man into the independence of Colombia.

When entering the city for the first time, I was overwhelmed by the typical Cartagena Architecture. What I love about the city is the colors, the architecture and the different cultures of people and the rich history and all this combined and united together. The restaurants and the shops and the ambiance of the people has a friendly vibe, and I can say this is one of my favorite cities to visit. I love the Caribbean because I lived in the Dutch Caribbean for years, but the Colombian Caribbean is the next region that I love to explore. I must say Cartagena is a city that you have to visit one day.

It was founded in 1924; the museum is in the process of renovating its museography. The museum offers two main thematic areas: on the ground floor, the history of Cartagena in four enclosures, from the prehispanic time to the beginning of the 20th century. Through the visit, there also spaces dedicated to temporary exhibitions. 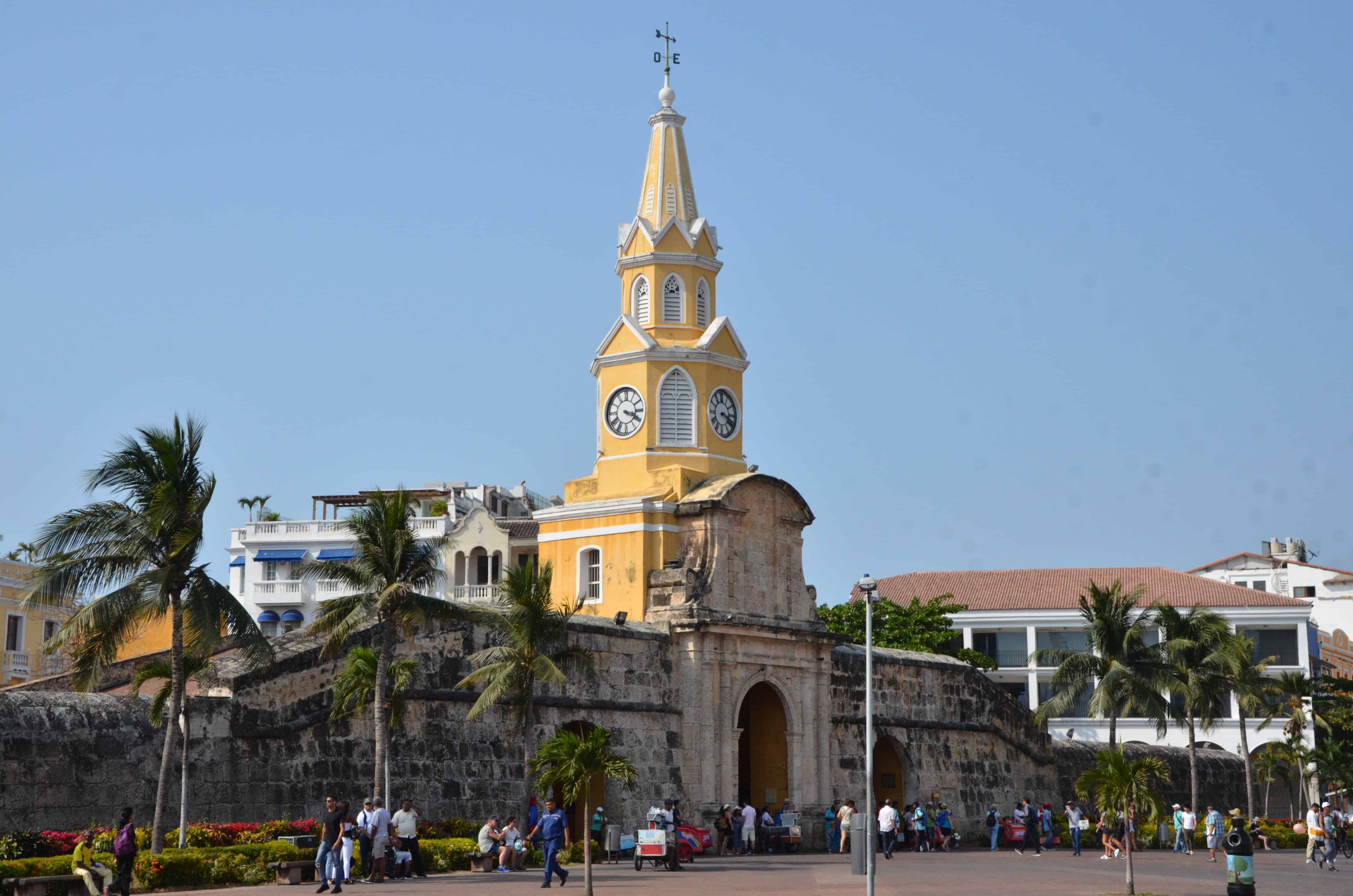 You will be able to make a trip to the past in the Court of the Inquisition and a tour around the stellar moments of the city throughout its history. You will find information about the Indian Karibe ancestors, inquisitors, and witches, conquerors and pirates, illustrious and anonymous individuals.

The Palace of the Inquisition and the House

The palace of the Inquisition is, in reality, a set of three two-story houses and a one-story house that later disappeared. This set was built around 1770 to serve as Head Quarter’s tot the Court of the Holy Office, established in Cartagena since 1610, original in two one-story houses located in this same place.

In this construction stand, the architectural elements inherited from southern Spain, where the Arabic architecture had an upswing in the periods when they tried to occupy Spain coming in from the sea via the south. For example, the ground where the cathedral of Malaga is standing now has a fascinating history of having a mosque,  and times of having a temple dating back more than 600 years. The construction of the house and the architectural elements were made by the Master’s hands of wood carpentry and masonry. They created spaces such as the vestibule and the cistern of the viewpoint in the house. These features make this enclosure an exceptional model of a typical Cartagena’s colonial house.

After Independence, during the rest of the 19th and half of the 20th century, this house was owned by civilians until the Colombian State acquired it for the home of this museum.

The Court of the Holy Office of the Inquisition

Was established in Cartagena de Indias in 1610 and was the third of the courts in America, after Mexico and Lima. The Court investigated, processed, and punished near 900 people during the 200 years of its permanency in this city. They were accused of practices considered heresy by the Catholic faith, such as witchcraft, enchantment, reading forbidden books, bigamy, Judaizing practices, and many others.

The advent of independence abolished the Inquisition, but its influence resulted in new forms of repression to impose other beliefs equally intolerant.

The house is a space dedicated in the past to the intolerance, and today turned over into a scenario of conviviality around the Memory of Cartagena and its people.

In the garden of the Museum, you can visit different attributes that were used by the Court when the verdict led to punishment. Also, if you see these attributes of punishment, you stop and think back in time, you realize how important it is today to keep standing for Human Rights across the world. 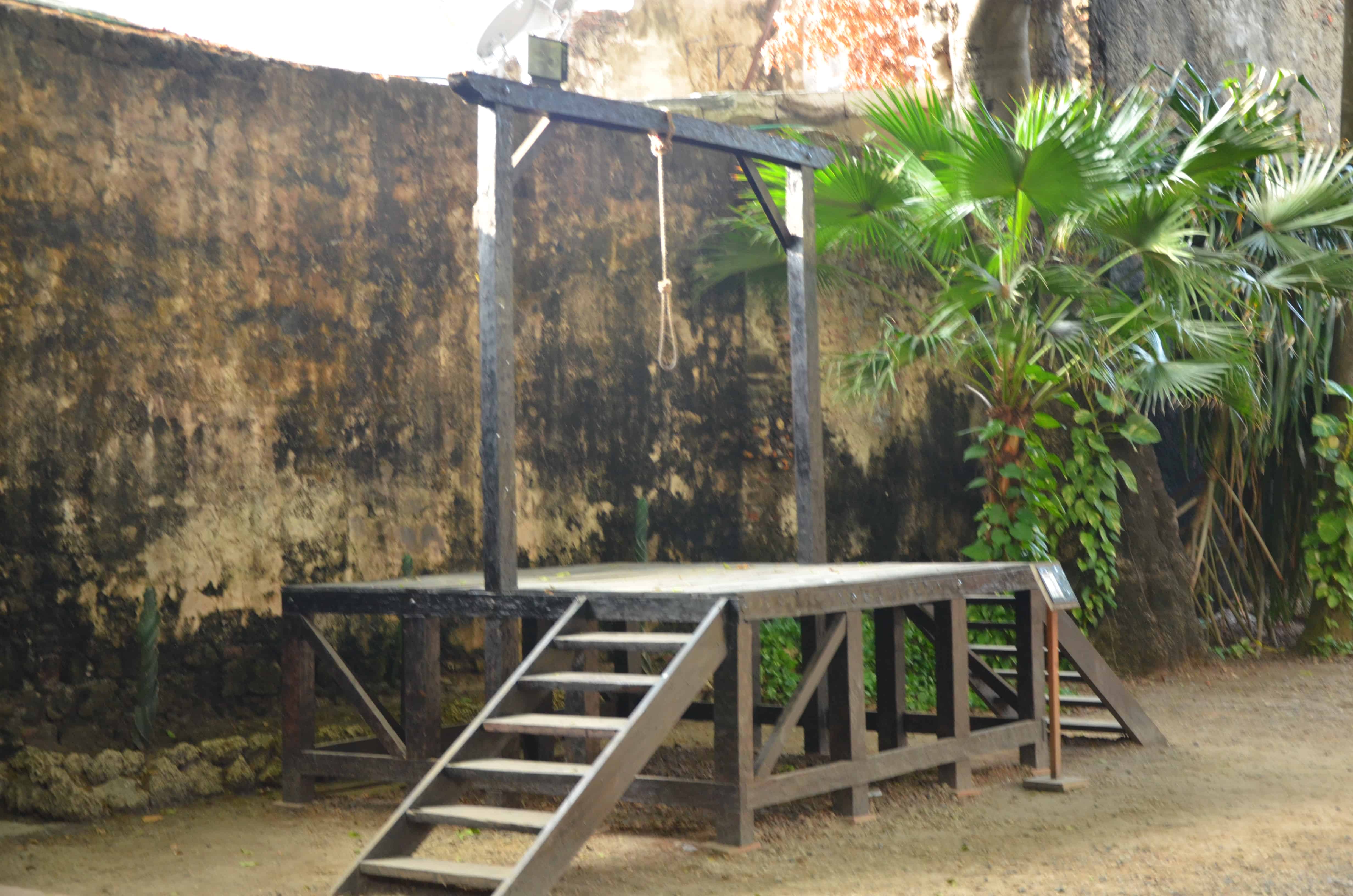 In the historical city of Cartagena are the next museums ; 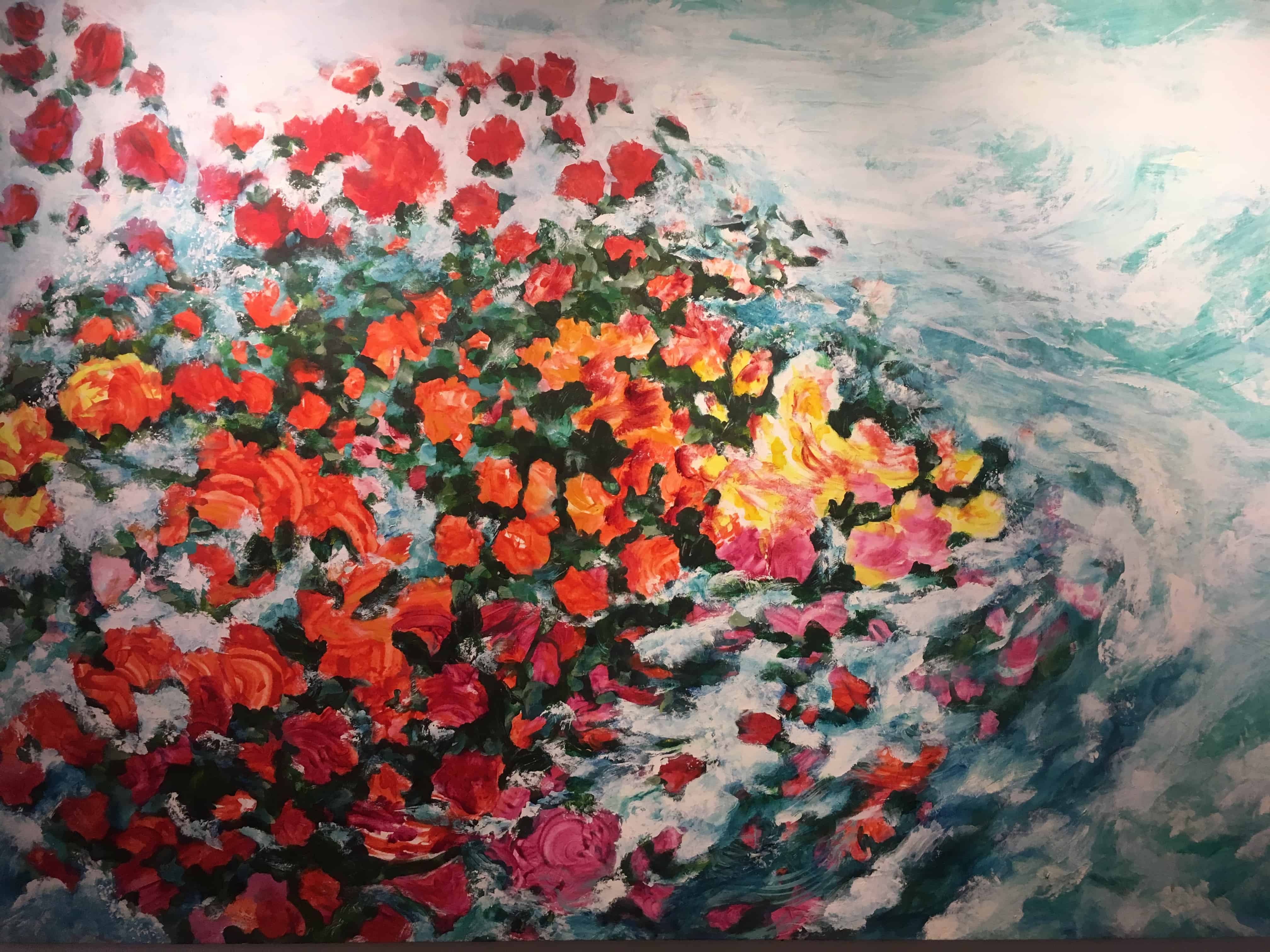 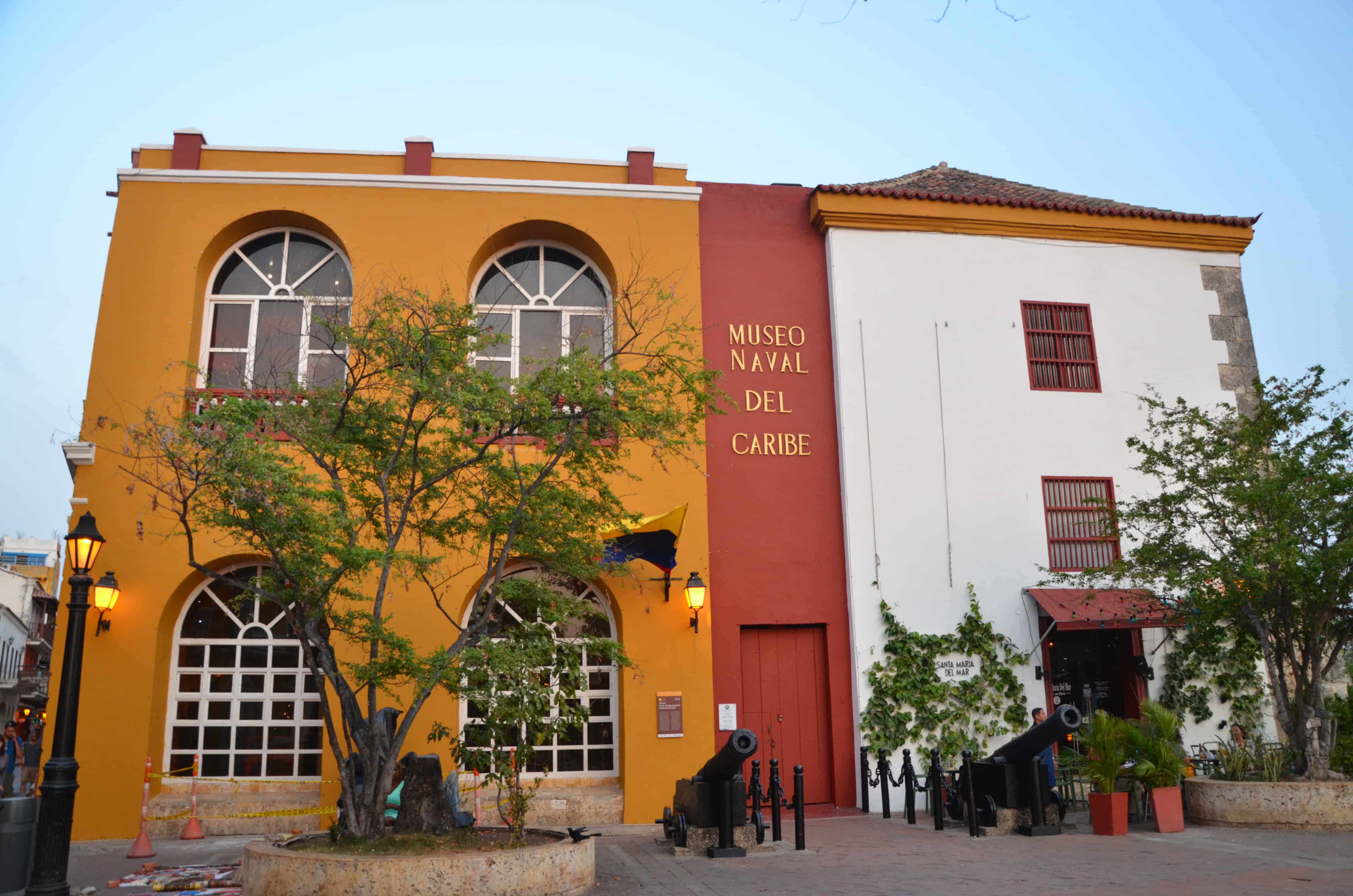 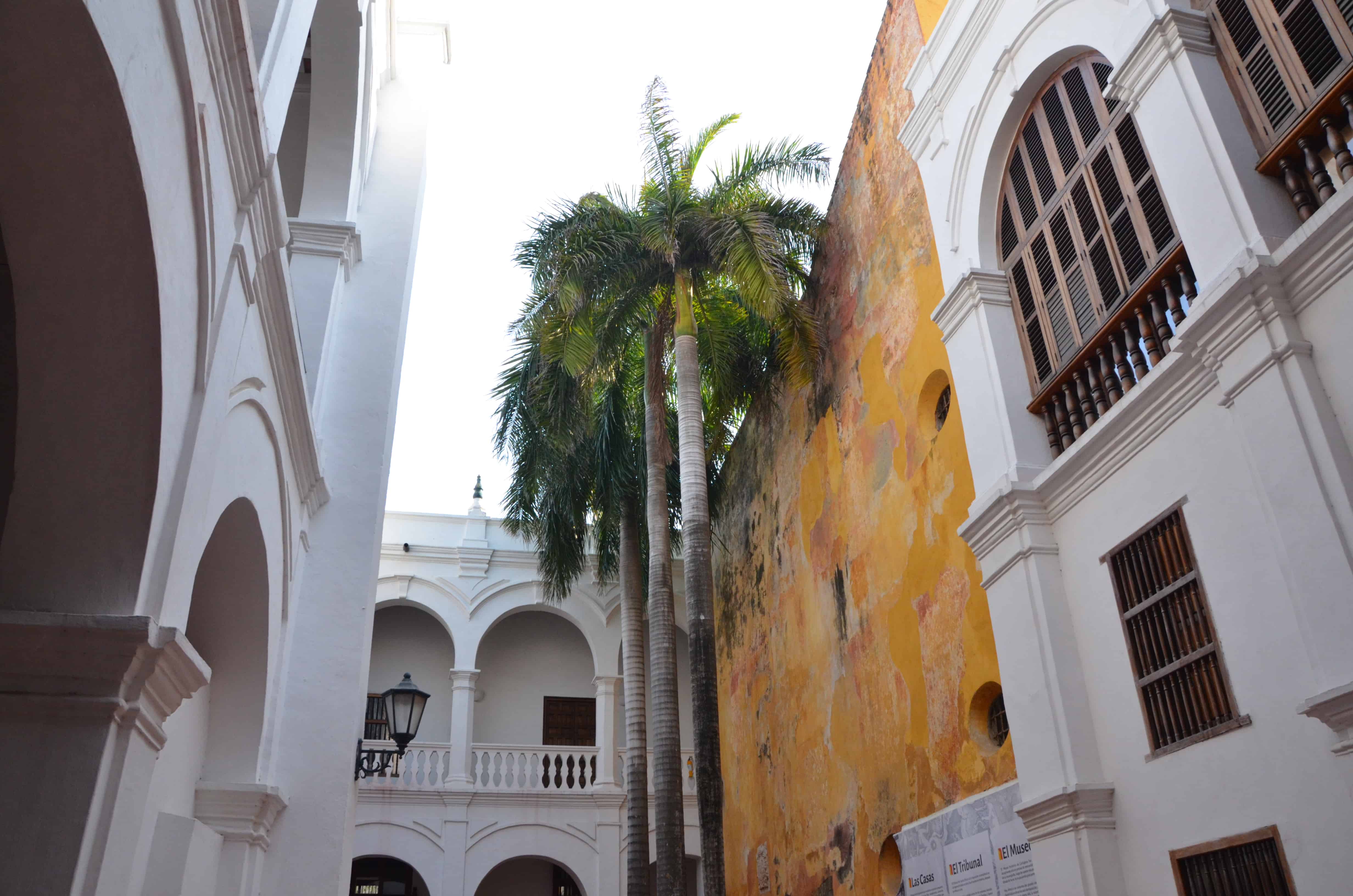 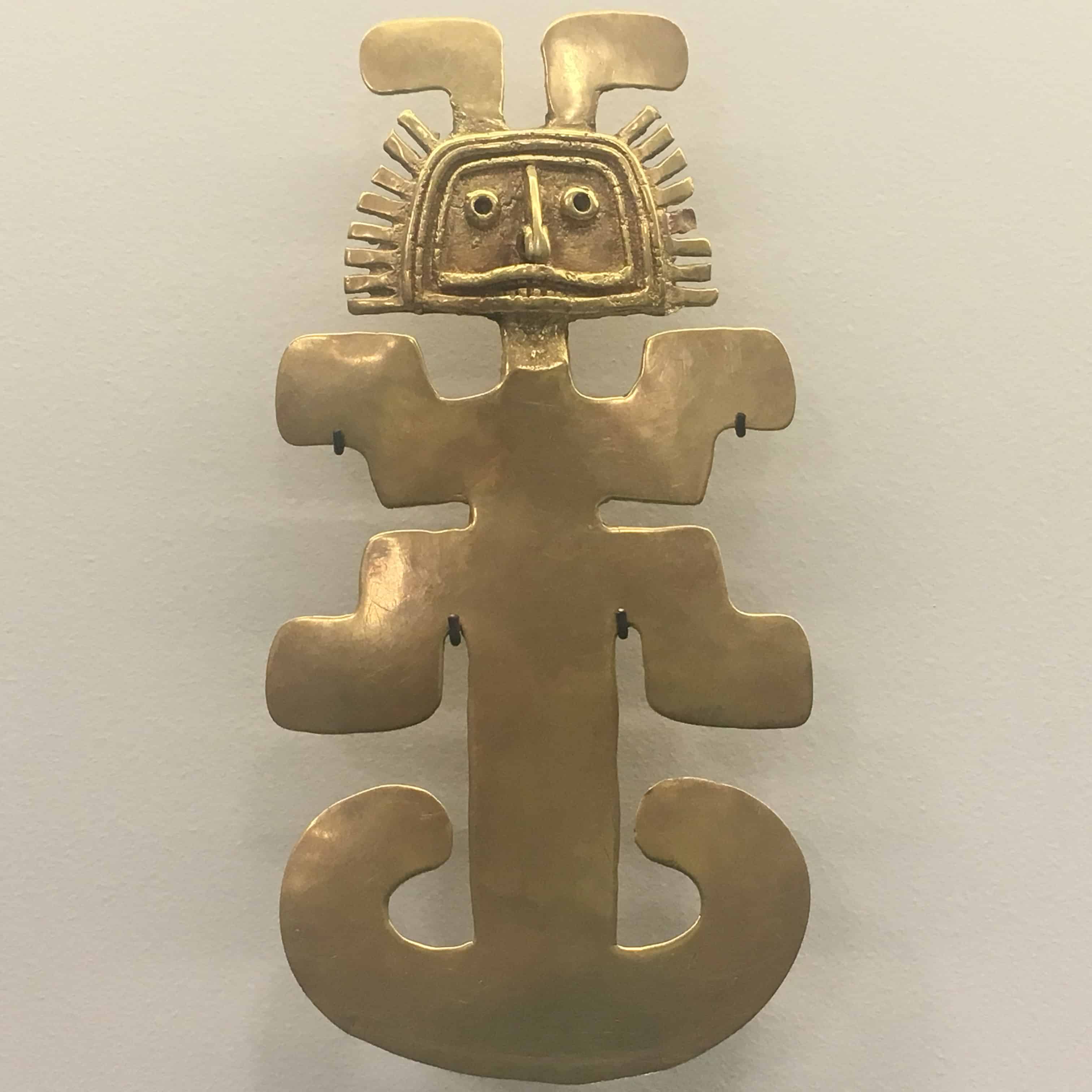 In my time, I was visiting the Historical city of Cartagena. This restaurant serves typical Peruvian cuisine and is my favorite restaurant to go to in Cartagena because the food is fresh and delicious. Every piece is a fresh explosion of taste. I must confess the tastiest and exquisite lunch I had in Restaurant Cuzco,

Walking to the city of Cartagena is noticed the beautiful an architecture of the hotel Spa Casa Pestaqua, Hotel Boutique Spa, Centro, Calle Santo Domingo 33 – 63

De design and interior are typical for Cartagena; the authentic elements are preserved and are seamlessly fit into the architecture of this unique hotel.

Sushi lovers in Cartagena, this is the place to be. Tasty and fresh Sushi and made in a creative, tasty way. Restaurant Sushi Room, Cartagena Centro histórico, Carrera 3 N 33-38

Baruco by Cuzco is my second restaurant to go out into the evening is Baruco The location is in the centrum, and the food is delicious, live music, high setting and the architecture of the restaurant bring you in the heart of Cartagena,

Perú Fusion is a nice restaurant, and the Peruvian food is lovely. 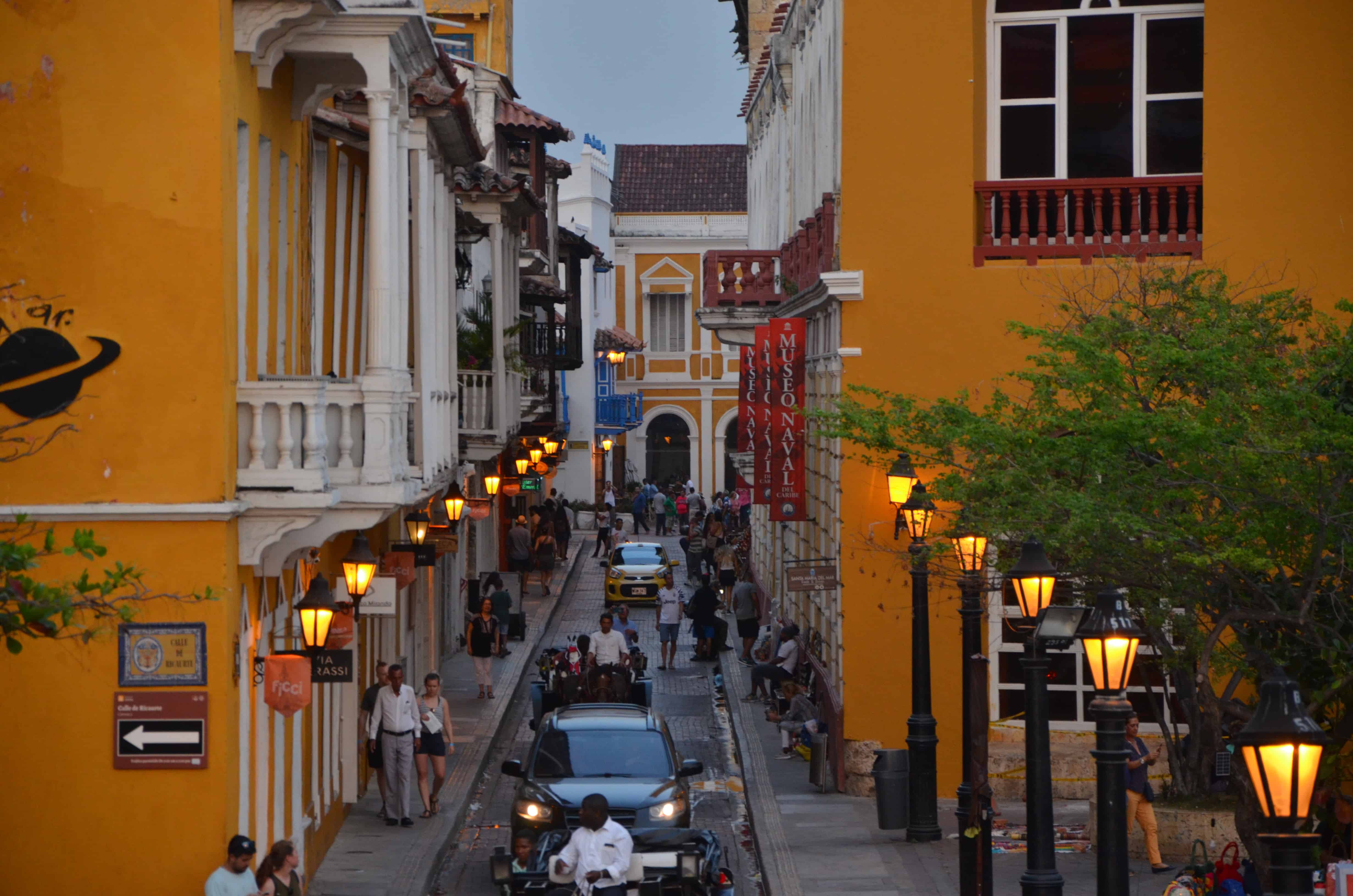 Located in front of the Clocktower next to Donde Fidel is this famous bar with beautiful architectural arches.  This two-story bar is the place to be around at 1 am when other bars and restaurants go closing. Beautiful people and travelers can dance here on Latin music, reggaeton, salsa, and merengue. It is this bar where I learned about the typical music champeta, a mix of African, Reggae, and Latin what is typical for Cartagena, and I loved it. In the evening this a beautiful place to visit. After an active nightlife, it is always nice to have a productive next day, and an excellent place to start is the Castillo.

It was impressive to visit. This is situated in the northeast of the Historical town and is on top of San Lázro Hill and 40 meters in its highest point. During the Colony of Cartagena, the intelligent decision was made to fortify this small mountain, because the enemy could take this and use it to attack the high walls of Cartagena city.

While visiting the fortress will be explained that the first part was designed by a Dutch engineer, and in 1697  it fell during the siege led by the French Navy. The remains where forfeited by engineer Herrera y Sotomayor and this was tested attacked under British commander Edward Vernon in 1741. In 1762, 21 years later, the Spanish engineer Antonio de Arévalo made an enlargement of the fortress. 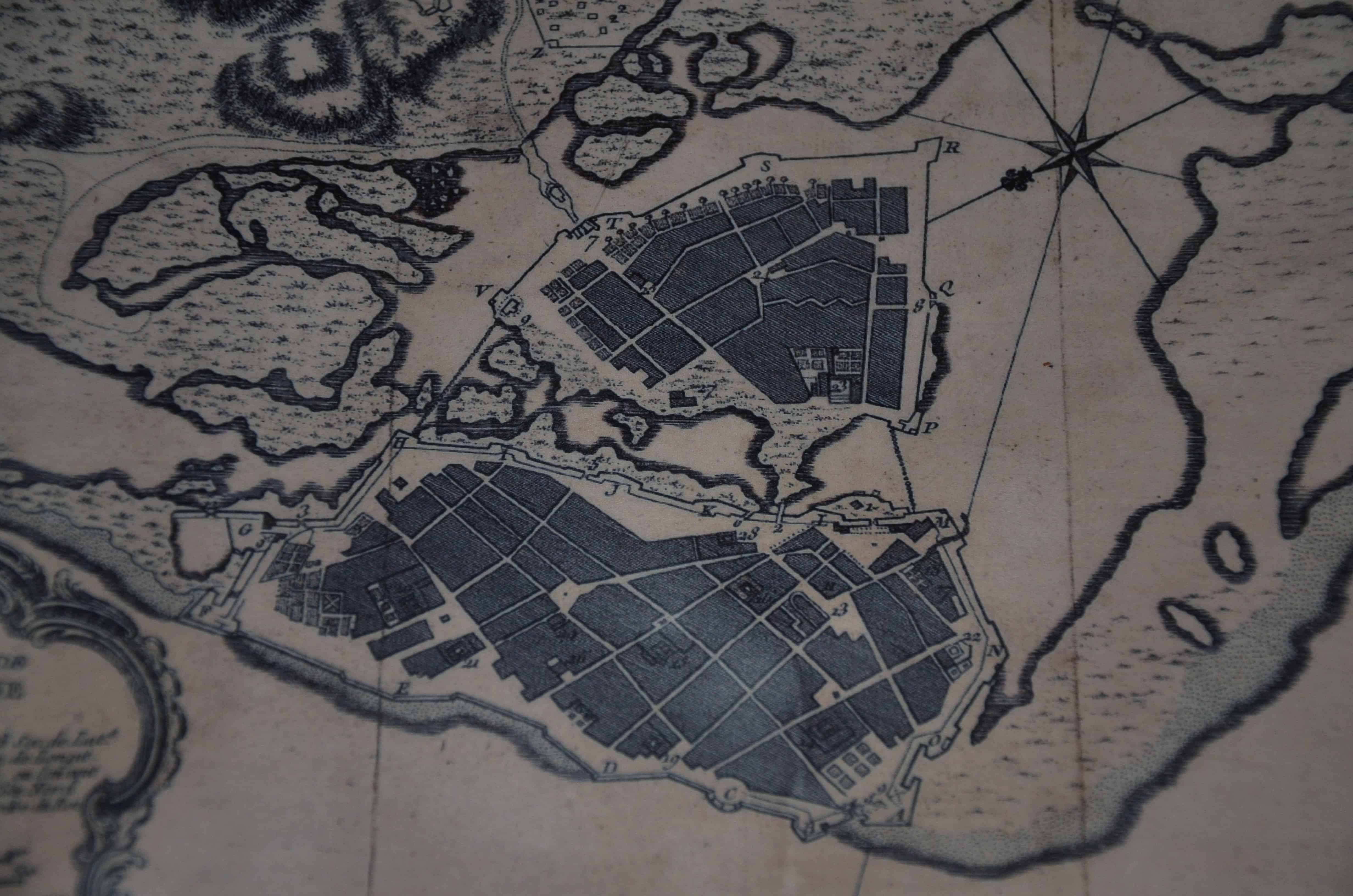 What I found fascinating is how they placed the cannons and that they made tunnels underneath the ground with explosives in the case of a massive attack by infantry. This engineering and architecture of the structure made history by victory and a successful defense at San Felipe de Barajas and the historical city.

By this, they maintained the Hispanic preeminence in the Caribbean and South America. 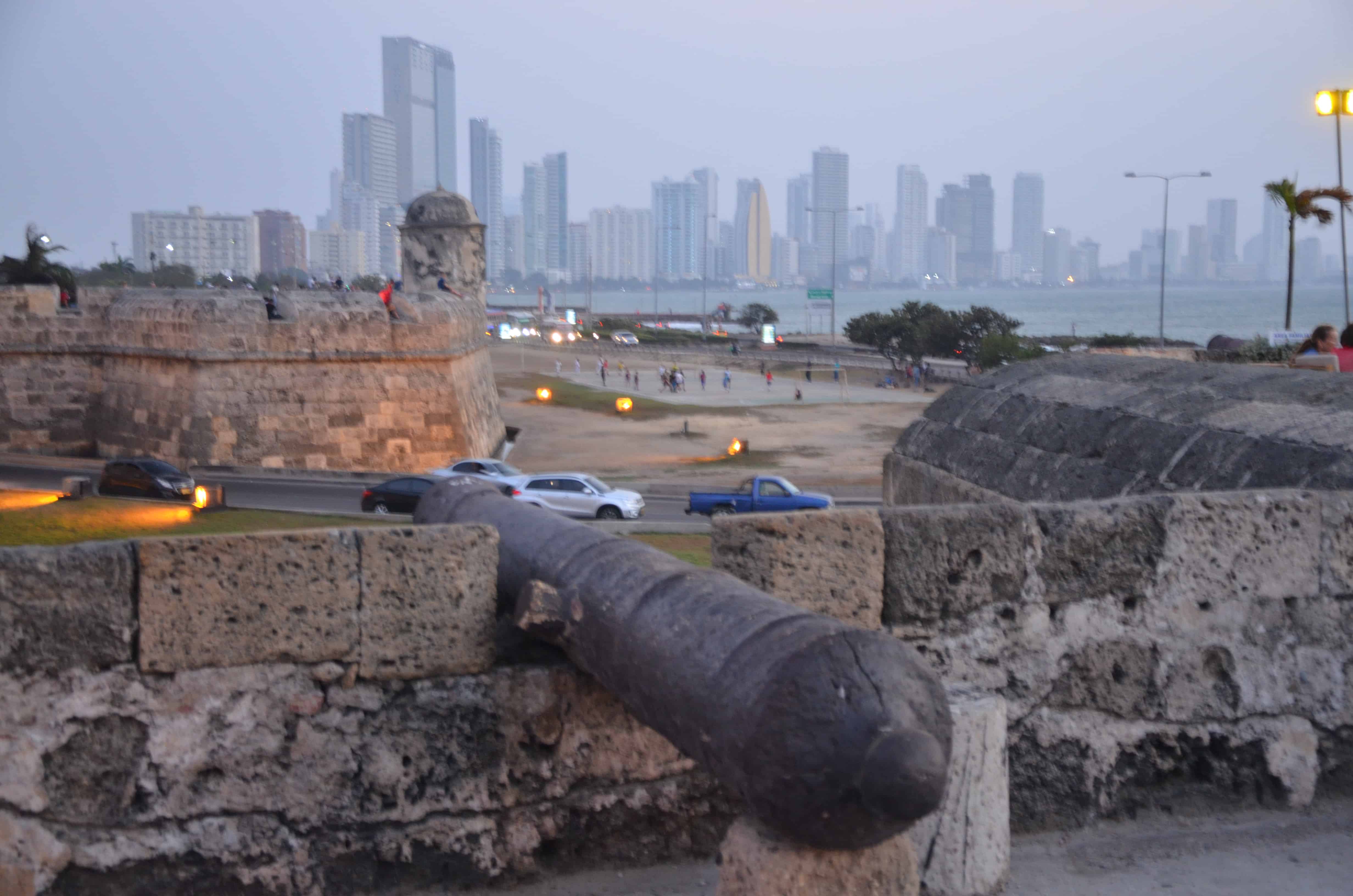 After visiting and studying this castle, it was nice to know more about this historical city and culture and gave much inspiration to write this travel blog for architecture about Cartagena.

When you walk along the impressive defense walls of Cartagena, it is nice to have a drink and stop at Cafe del Mar when the sun goes down. The atmosphere is terrific, and people are enjoying the view and the moments on this lovely spot.

Close by down the steps coming down from Cafe del Mar; there is an Art Gallery called NH Galeria.

The art pieces are fascinating made by different artists.

The exhibition of artwork comes from different styles and inspiring to see. 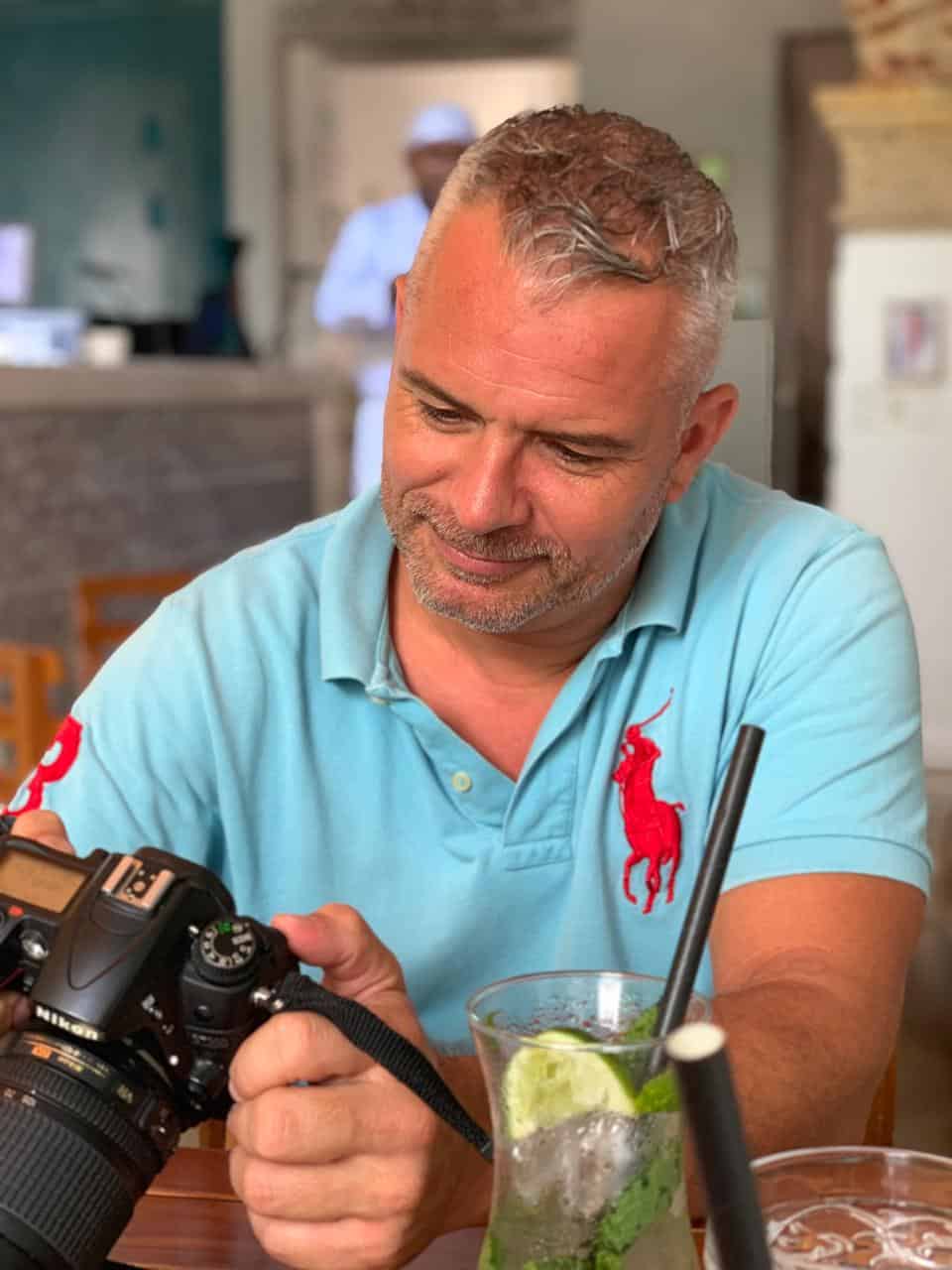 My days in Cartagena were terrific, and without any doubt, I will come back to revisit this city and area. Cartagena de Indias has so many things to offer and to explore. The colors of the architecture, the taste of different food, the energy, and the creativity of the people, culture, and city are second to none.

I hope you are inspired to visit one day, Cartagena, and that you liked reading this blog, and if you leave a comment, that will make my day happy.

Please do not hesitate to receive our newsletter for all the new updates about traveling.